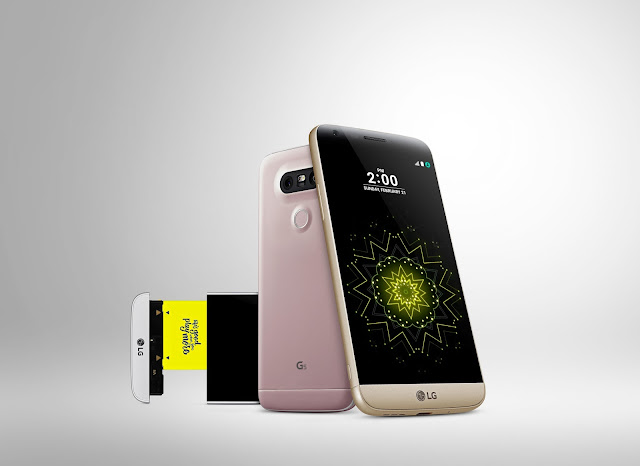 LG has officially launched the much anticipated LG G5 handset at MWC 2016 .The phone , a spiritual successor to the LG G4 is also the first handset to drop LG's polycarbonate chassis in favor of a all metal hybrid unibody that offers not only some level of class , but also expansion features and a removable battery ( a feature omitted by 99% of flagship phone OEM's these days) .The phone , designed with curves harks some resemblance to the LG G3 of 2014 but unlike the older handset , the new G5 features a slightly pocket friendly design and a smaller screen of 5.3" but this is still a 2K IPS display so you wouldnt need to worry about anything there  and smart cover features , it has Gorilla glass protection,the display supports always on technology. Powering the handset is Qualcomm's second gen 64bit designed Snapdragon 820 , the chip , clocked to 2.2 Ghz is designed with custom Kryo cores and it has Adreno 530GPU . The phone has 4GB of RAM and it has 32GB of internal storage which can be expanded via microSD upto 2TB .

Turning the handset to the rear side , we can see a horizontally placed camera module , this module has a 16MP main camera for your usual photography and this supports OIS as well as laser autofocus , the main 16MP camera is supported by a secondary 8MP rear camera that acts as depth capturing sensor ) The camera supports 4K video recording . The front camera is 8 MP and this is a wide angle lens so you dont need to worry about leaving out some friends when taking selfies , speaking of friends , LG has some "friends" which includes accessories from 360 degree cameras , Bang and Olufsen speakers and extra battery addons to complement the 2800 mAh removable battery inside . The phone will be available from from April of this year for $599 . 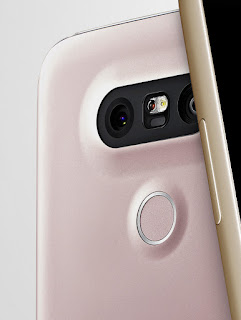 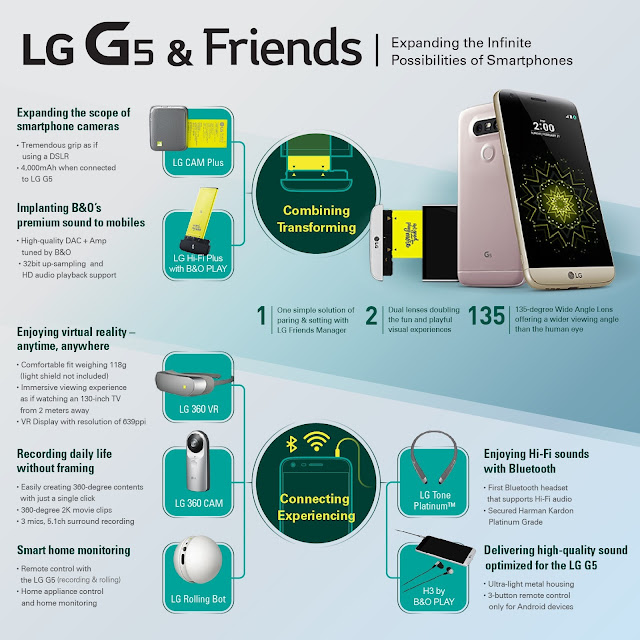