Pebble has unveiled its latest iteration of the Pebble smartwatch line - the new Pebble Time is the company's first smartwatch to feature a color display , but like previous models , the Pebble watch boasts a 7 day battery life thanks to its Color E-INK display and proprietary software and low power hardware . The watch has already hit gained $500,000 in backings from its Kickstarter page in a few hours which is a clear sign that this watch will be a hit once it goes on sale .

The new Pebble watch is reported to be 20% thinner (the new watch is only 9.5mm thick) than the Original plastic pebble watch launched almost two years ago . All models feature a stainless steel bezel to which the somewhat curved chassis is attached to .  The product features a 22mm watch strap port which means the standard rubber ones can be dropped off for any 3rd party watch strap of your choice , Pebble lists the color options as follows -

Interestingly , the new Pebble watch has a "smart accessory port" which is reportedly a jack to which 3rd party accessories like more sensors (fitness sensors comes into my mind) and smart straps can be mounted on .The watch ,unlike previous models , has a microphone built in , this used for some voice features which is further explained as follows - 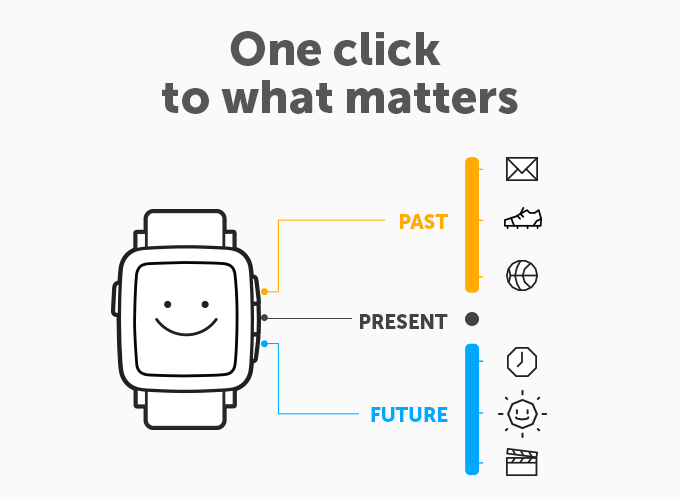 Software on the new Pebble watch is also a huge step up from the original , drawing inspiration from rival products , the new interface has a Timeline feature which "organizes relevant information like notifications, weather, news, travel, and reminders chronologically." this removes the tast of opening a app to access information , and therefore you can view content like mail , messages , call information,weather and even sports scores with just a few button clicks . The new Pebble is also compatible with all existing pebble apps so you don't need to worry about migrating with those watchfaces you just bought .

Pebble is also partnering with a few companies (Many including Pandora , Misfit ,Jawbone,ESPN,Evernote ,Weather channel ) in order to make the app experience even better on the new watch .

The new Pebble watch is said to go for $159  $179(on kickstarter - the previous offer ended in a few hours as the set donations were met) and $199 for all of you who will buy it on retail .And of course , the watch only works with iOS and Android .