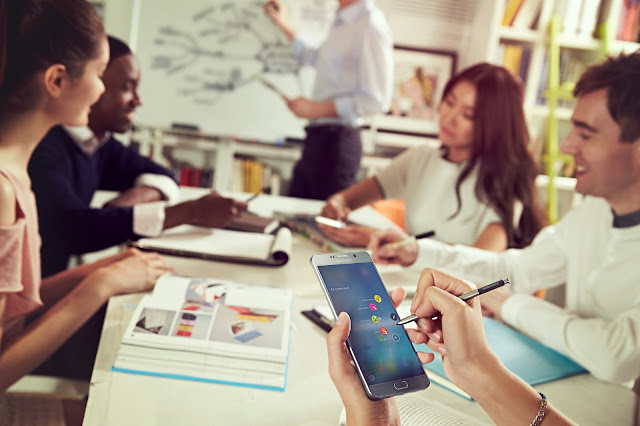 The S-Pen stylus on the Galaxy Note series is probably the main reason why the product line is popular in the first place , the S-Pen ,along with the added features of the Note software made pulling a digital stylus out enjoyable once again ,but apparently the experience is not so great for some Galaxy Note 5 owners as the new model has a issue that will get the stylus stuck in its silo if you insert it the wrong way . The new S -Pen , a digital stylus which uses a Waycom digitizer is also equipped with a spring loaded action which once pressed releases the pen from the silo , earlier models of the Note line featured a fingernail pull out (queue the "thats what she said jokes) tab that worked without any issues even if it was inserted the wrong way . If the new S-Pen is inserted the wrong way , the spring section of the pen gets trapped in the S-Pen proximity sensor which might get destroyed if the owner decides to use brute force to pull the trapped pen out -rendering your precious device's S-Pen detection system useless as well as render almost half of the S-Pen features that work when the pen is out of its silo .


Although such a situation on a older generation Note could have been performed in a DIY experiment  , the new model is completely sealed up so it is advisable that you take it to a repair centre immediately .Although one can assume that people won't be careless about inserting the pen the correct way , there will always be a crowd who might mix things up in a hurry ,and in order to avoid costly lawsuits ,Samsung has decided to advice users to read the manual in the first place  , the issue of the pen getting stuck - aka Pengate was known to Samsung apparently and it was addressed in the manual , Speaking to the BBC , Samsung stated that

"We highly recommend our Galaxy Note 5 users follow the instructions in the user guide to ensure they do not experience such an unexpected scenario caused by reinserting the S-Pen in the other way around."