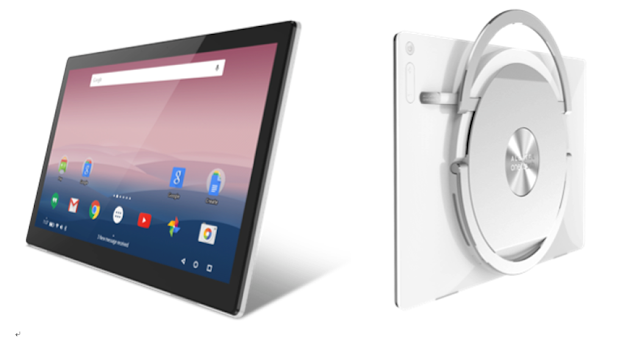 When it comes to Android tablets , you can buy a device in a huge variety of screen sizes ranging from 7" to all the way up to about 12" but Alcatel -a company that has a long reputation for launching multiple devices at trade shows has unveiled the biggest one yet - the Alcatel Xess  17.3" tablet .

At first glance ,t he Xess looks a bit like a all in one pc , well thats because Alcatel actually markets the tablet as a family oriented device which will sit on the kitchen counter at one time and the child's bedroom the next . The large 17.3" tablet however is not going to be suitable for any gaming unless you have a controller around , but then again the ppi count will surely be a turn off as well as the 2GB of RAM and the 1.5Ghz Octa core chip inside it . Resolution on the Xess is said to be 1920x1080 which would look fine on something like a smartphone or 10" tablet at most , but the 17.3 inches makes the PPI count reach a way below average 127ppi (not a major issue if you don't mind similar panels on gaming laptops ) The device has a 10000 mAh battery 32GB of onboard storage and a MicroSD expansion slot upto 64GB , Android 5.1 and , a carrying handle and a stand that can be used to prop up the tablet in either 30 , 50 or 75 degrees depending on what you are doing .