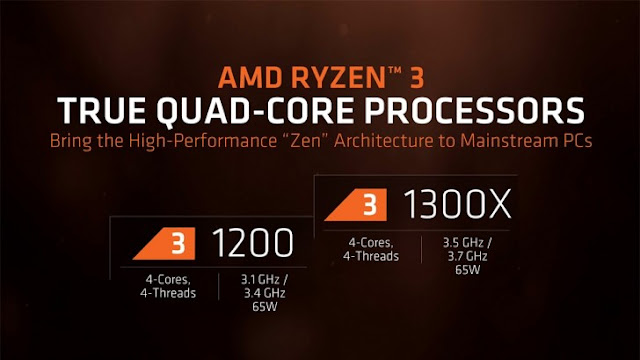 AMD has been rocking Intel HQ for a while now , the processors , which undercut the high price monopoly enjoyed by Intel for similar performance is now set to get even better with the announcement of the Ryzen 3 series which is technically the arch nemesis of the Intel Core i3 series  .

As we said earlier , the Ryzen series is basically designed to give intel a run for their money and put AMD back on the map . For many years , Intel's Core iX series remained unchallenged ,but now with the Ryzen 7 and the whole advantage was simply lost overnight (which eventually prompted Intel to announce their Extreme Core i9 series ) . The Ryzen 5 , which challenges the i5 series was also received well and cost much less than their intel counterparts , and now we have the entry level Ryzen 3 - which is technically a Core i3 killer.!

Both chips support overclocking which is superb considering that the other side of the fence only has one model with the similar facility . The overclocking feature is supported on a B350 motherboard  and if you don't want to overclock , any of the following motherboards are pin compatible - X370, B350 and A320

So who is this chip for ? well for starters , the chip is cheaper at outright cost and therefore this would mean that this is suited for the budget conscious gamer or a general user who wants to save a few hundered bucks . The chip ,unlike its intel counterparts , will need some form of an external GPU (not that any "serious" gamer uses onboard graphics anyway) to take full advantage of the affordable  powerhouse that is the Ryzen 3 .

Written by Rakitha for MasHD
Sources - Gsmarena
Anandtech
reported by Unknown at 10:50 AM