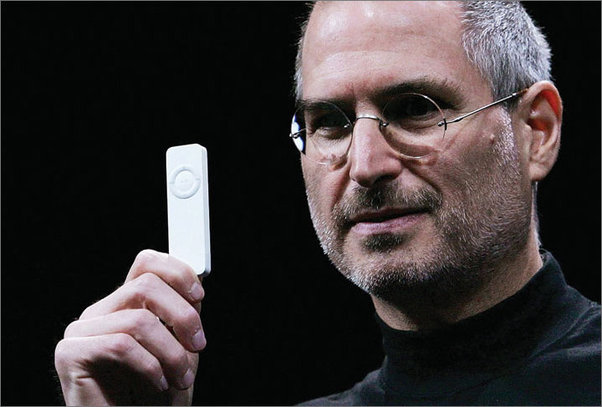 Apple has officially discontinued the iPod Nano and iPod Shuffle today , the move , which may upset a few remaining fans of the two iconic music players would now probably have to move up to the iPod touch as it has now doubled in storage (32GB and 64GB instead of 16/32 options early) or a proper smartphone as music seems to be heading into the world of live streaming and online downloads rather than plug and sync .

Apple first announced their iPod in 2001 , this is a symbolic event for Apple as it signaled the move from being a  PC manufacturer to a consumer electronics . At the time , MP3's were still a relatively new format and people did still use Walkman devices for portable music . The iPod changed all that , and offered a 5GB option which can hold 1000 songs in your pocket - This basically put Apple on the map ! literally ! .

With successful hit after hit , the company soared in profit as the iPod continued to be the Walkman of the 21'st century . The iPod eventually took on the title "Classis" and continued to be a hard disk only model until its eventual discontinuation in 2014 , During this time , Apple also unveiled the iPod Mini - a lineup of smaller capacity and portable models which were quickly discontinued in two years time as it paved the way for the Nano - a device which can literally fit into that small pocket found above the right pocket in Jeans  And the shuffle .


The iPod Nano was an instant hit , it was affordable , came in "hip" colors and had all the things the millennials wanted at the time  . And by 2007 , it had video playback and in 2008 it even came with a camera - a feature which at the time was all the rave as YouTube and facebook were still in their infancy . During this time , Microsoft decided to jump onboard the media player ship with their Zune (only to eventually give up a few years later) . The shuffle meanwhile created even more sales as it was basically the cheapest Apple consumer device for many . The shuffle had no screen and instead relied on a scroll pad (and even went "buttonless" in 2009 ) the thing was an instant hit , and like the shuffle it came in many colors and many design variants with changes in almost every life cycle But this rapid success was soon its downfall as the iPod lineup was suddenly attacked from forces within - the iPhone .

Whether you like it or not , the announcement of the iPhone signaled a new beginning for smartphones , these devices , which were usually bulky and had very little to do with entertainment suddenly became the "all you want" device - replacing both the use of PDA's , small computers and the iconic flip style phone in favor of a monolithic touchscreen candybar . This device in a rather strange twist also had a demon spawn called the iPod touch  - a device which brought features of an iPhone to a lower price bracket - basically a iPhone without the phone , this was also another blow to the "dumber" iPods as they lacked the games , touch interface , browsing , messaging and other apps found on the iOS powered iPod Touch . So basically , the Shuffle and the Nano's days were numbered from that day on . The iPod Classis - the successor and the last heir to the iPod legacy was axed off in 2014 with favor given to the iPod Touch . And now , after no proper updates , the rest of the "Non - iOS " devices are to be sent to the axe as well .

Farewell iPod Touch and iPod Nano , although you are no more , the legacy you leave behind will always remain .

Source - GSMarena
reported by Unknown at 10:21 AM