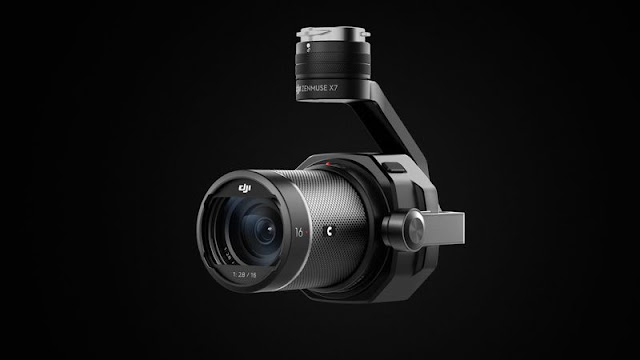 DJI has officially announced their Zenmuse X7 gimbal . The system , designed for Aerial cinematography is set around a custom DL mount and a super 35 sensor unlike the X5 variants that use Micro four thirds sensor .

The X7 features 14 stops of Dynamic range . The sensor , boasting recording capabilities unto 6K in CinemaDNG RAW or 5.2K Apple ProRes at up to 30fps can also do 3.9K CinemaDNG RAW or 2.7K ProRes at up to 59.94 as well . The camera , which features DJI's own custom LOG format - D - Log curve and D Log gamut are both part of DJI's latest DCCS - DJI cinema color system .


The stabilized camera , launched as a gimbal attachment for the Inspire drone system also features 4 custom made DJI prime lenses made out of carbon fiber . The DJI DL mount lens lineup includes a 16mm , 24mm , 35mm and a 50mm kit with each lens having a f2.8 aperture . The 16mm lens features a Built in ND filter - ND4 .