Sony has officially announced their new mid range lineup for 2018 . The Xperia XA2 ,
XA2 ULTRA and the L2 sit below their XZ series brethren ,but new spec upgrades make
these mid rangers easily capable of taking on phones of their same class .


The XA2 and XA2 Ultra are basically the same phone internally . Both phones have a
metal unibody and are both designed with the Xperia SP aesthetics . The XA2 , which is
the smaller variant of the two features a smaller 16:9 5.2” display with a 1080p
resolution (424 ppi) . The screen is protected by a sheet of Gorilla glass 5 and it also houses a
slot for the 8 MP front facing camera which has a f/2.4, , the sensor is said to be 1-4” model . The
rear sensor , which is basically borrowed from the Z5 Compact - has a 23mp count (f2 1-2.3”
sensor) and has HDR and 4K video built in .


Powered by a Snapdragon 630 Soc with 3GB of RAM and 32GB storage(With MicroSD expansion of course) , the phone is certainly capable and thanks to Android 8.0 Oreo , it will certainly be fast as well . Oh and the phone has a 3300 mAh battery and USB Type C fast charging (3.0) as well .

Processing power remains the same as both have Snapdragon 630 processors with Adreno 510 Graphics . The phone however has 4GB of RAM (up from the 3GB found in the XA2) and has a 32/64GB storage option with MicroSD expansion .The battery has also been increased to 3580 meh , and it too is backed by USB C fast charging .

Both the XA2 and the Ultra variant will ship by February with Android Oreo out of the box. 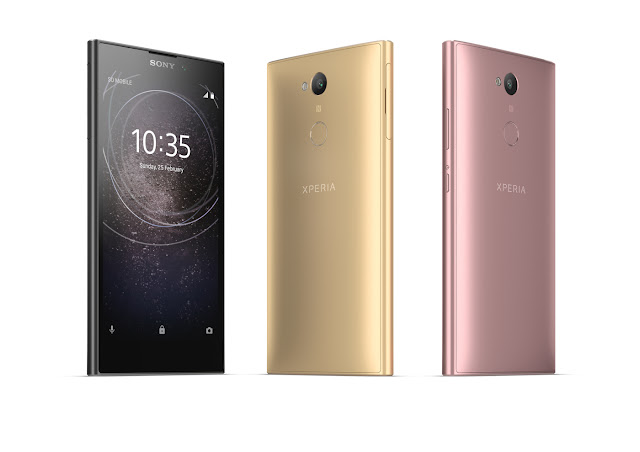 The Xperia L2 is the more entry level option of the trio launched at CES 2018 .The phone features a 5.5" 720p display with 267ppi and has a Gorilla Glass protection . The phone runs on Android 7.1.1 (Nougat ) rather than Oreo found on the other two , but considering that this is a more budget option , its not all that bad . The L2 is powered by a Mediatek MT6737T Quadcore processor with 4 A53 cores clocked to 1.5Ghz ,the phone also has 3 GB RAM and 32GB of storage as well with MicroSD expansion of course . The rear camera is said to be a 13MP unit with 1080p recording and it is backed up by a 8MP front facing camera . The battery on the phone is said to be a 3300 mAh unit and it has USB Type C (but does not support any Fast charging standards) .

reported by Unknown at 6:46 AM